Introduction - Why Food and Culture? 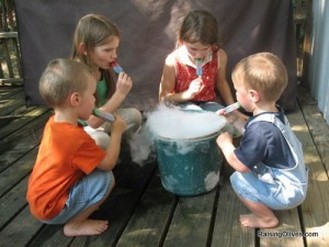 Eating popsicles and watching dry ice melt
For over half a million years food and the search for it have influenced both human and historical development.  The study of food lends itself to multiple "ologies" - anthropology, biology, ecology, mythology, technology and zoology among them. (Food in History, viii)  Because food is an imperative element of human survival, and because there has never been any other satisfactory human body fuel that could replace it, abundant lore about food has appeared throughout human society and culture.  From evidence in ancient (and modern) burial grounds to classical and contemporary literature, from verbal tradition to recorded histories, from ballads to poetry, from stories about food practices and their numerous meanings, foodways have been present wherever people are gathered.  (Foodways and Folklore, viii)

For each person food has meaning.  Cultures, clans, families, and the identity of some individuals are shaped by the foods they select and the ways they prepare and serve them.  Foods can evoke nostalgia for past times, and sustaining memories can be as nourishing to our spirits as a warm cup of hot chocolate on a blustery winter night". (Margaret Mead, Foodways and Folklore, p. x)

Food is related to cultural identity, continuity, security, validation, economics and social control.  In his book, Food in World History, Jeffrey M. Pilcher provides case studies focusing on topics such as the use of food as a tool of colonialism in Africa and Asia, the influence of the Italian and Chinese diasporas on US and Latin American food culture, how food was fractured along class lines in the French bourgeois restaurant culture and working-class cafes, the results of state intervention in food production and distribution, and how the impact of genetic modification and food crises has affected the relationship between consumer and product. (Pilcher, Food in World History, preface).  Food use and behaviors related to foods may have embedded meanings of social status, inclusion and exclusion, boundaries, and negotiations of boundaries. (Foodways and Folklore, p. xi)

Today we can explore the impact of rapidly developing technologies and globalization on food and issues related to food.  Here we begin to investigate mass marketing, the media, and the evolution of McDonaldization and Coca-Colonization, with the loss of regional food traditions as they are supplanted by homogeneous foods such as hamburgers, tacos and pizza.  Regions and their traditional foods are less well defined.  Sushi and curry can be found in any city on the planet.