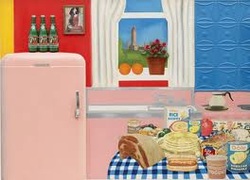 In lived experience, the modern kitchen is often a far cry from the visions of architects, designers, manufacturers, and advertisers. It is a place of mess and mishap, socialization and sensuality. It evokes a gamut of emotions, fostering creativity and genuine pleasure as well as anxiety—manifested in the extreme as Mageirocophobia, the fear of cooking. It is also, statistics confirm, the most dangerous room in the home.

As spaces we occupy and animate daily, and which are constantly reflected back to us in popular media, kitchens have since the 1960s become an increasingly rich subject for artistic expression. For Pop artists, the proliferation of branded goods in the kitchen provided a powerful visual currency. However, such visions of plenty were not embraced by all. Artists, activists, and designers began to critique the modern kitchen as emblematic of much that was wrong with modern society, representative of unsustainable levels of waste and imposed social conformity. They questioned modernism’s disregard for social inequality and cultural difference in promoting “universal” ideals. Feminists condemned designs, including the Frankfurt Kitchen, that they felt reinforced the physical and psychological isolation of women in the home. They exposed mythologies that disguised and devalued women’s domestic work with veils of “labor-saving” and “leisure.”

The term “kitchen sink drama” refers to the postwar British cultural movement in which artists brought into focus the everyday experiences of alienated working-class characters. However, as the varied works in this section demonstrate, the familiar setting of the kitchen is employed by all kinds of artists, taking divergent forms and critical positions. Here kitchens are addressed as dreams, nightmares, and battlegrounds, challenging us to consider larger issues surrounding popular culture, consumerism, gender, and the intimate realities of domestic life. 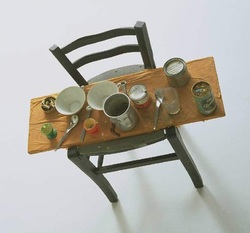 Spoerri, a self-proclaimed “paster of found situations,” made this assemblage from his girlfriend Kichka’s leftover breakfast while waiting for some visitors. “I pasted together the morning’s breakfast, which was still there by chance,” he has explained, including dishes, utensils, food, and cigarettes mounted on a small chair and wood panel. This is displayed on the wall so it “defies the laws of gravity” and “the view to which we are accustomed.” Spoerri’s reliance on chance and his use of found objects reflects a debt to the Dada movement that was shared by other artists of the Nouveau Réalisme group.